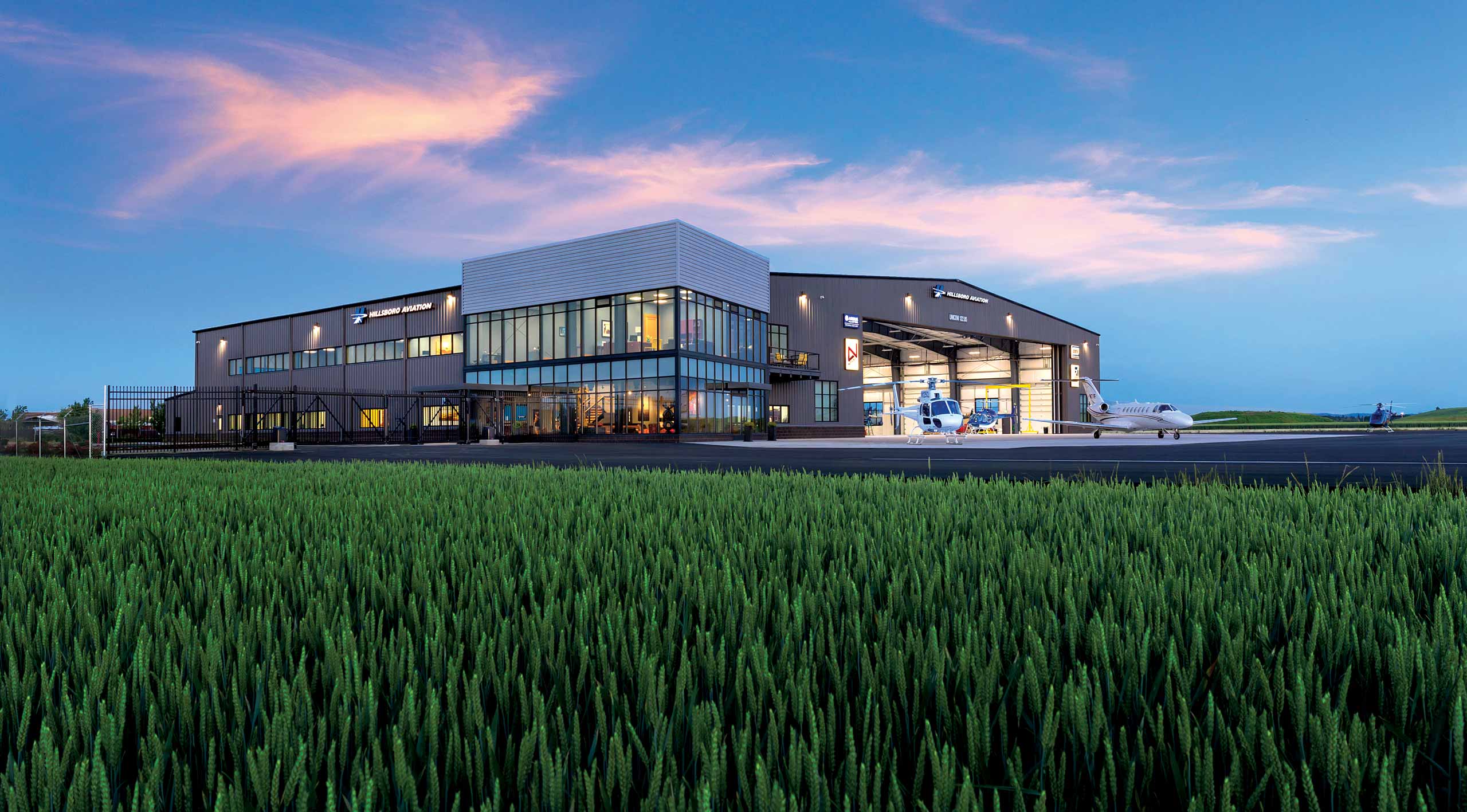 This article first appeared in the Heli-Expo edition of AIN on March 6, 2019. Story by Kerry Lynch. Read the digital edition here.

Over the past three years, aviation services company Hillsboro Aviation (Booth C4628) has opened its new corporate headquarters and hangar, added a half-dozen turbine aircraft to its contract flying fleet, and now is wrapping up a rebranding initiative that highlights its continued growth.

The rebranding is providing an opportunity to showcase a company that began in 1980 with a single helicopter and has grown into to a global business with more than 90 employees and varied operations that range from contract operations to aircraft sales, services, parts, charter, and management. A culmination of a few years, the rebranding includes an interactive updated website with “relationship-centric” customer portals. The bulk of the rebranding is complete but a new look is still in the future for its Heli-Expo booth.

The rebranding also enables Hillsboro to spread the message that as the company approaches its 40thanniversary, it is continuing to invest and expand in core businesses, said Rekha Lyons, director of marketing and communications.

This message is particularly important because four years ago, Hillsboro had sold its flight school. Acquired by Renovus Capital Partners and Graycliff Partners, the flight school had become a major piece of Hillsboro’s operation, expanding into a business that involved 74 aircraft and six simulators. Training students from more than 75 countries, the school had become a key part of Hillsboro’s identity and remained a part of it for a few years after the sale.

“We realized when we sold the school, we had been known internationally as a flight school and we want to make sure people know we are still growing,” she said.

By the time of the sale, Hillsboro had grown to 16 profit centers, added Max Lyons, owner and president of the company. With its sale, Hillsboro subsequently turned its attention to investment in its remaining business. This resulted in the 2016 opening of its state-of-the-art 51,000-sq-ft facility that represented an $8.5 million investment. Hillsboro also has added four [corrected for accuracy] turbine helicopters – two Bell 205A-1++ and two [corrected for accuracy] H125s (AS350 3Be) -- to its fleet over the past 30 months, along with a Beechcraft King Air.

The additions brought its fleet to 14 turbine aircraft that provide support for firefighting, search and rescue, natural resources, aerial survey, construction, and numerous other activities.

This investment has come with cautious optimism, Lyons said. Noting the economic uncertainties that the helicopter community has weathered over the past decade, he said Hillsboro also faced challenges – including the cancellations in $50 million in aircraft orders. But at the same time, Hillsboro also was able to stay profitable as its different businesses provided balance. Its parts business, for instance, has grown exponentially in some years and is still growing.

Its contract flying in support of firefighting has remained solid business for Hillsboro. In fact, it has become so demanding that a season once that ran six to seven months is stretching to nine months – and that is presenting logistical challenges and requiring additional support.

Also, Lyons said he is beginning to see improvement in the aircraft sales side, particularly for light helicopters.

“Building a company like this you have optimism and confidence,” he said. “I don’t have specific levels of confidence in the global economy… what I am confident in our ability to navigate through it.”

One of the keys, stresses Lyons and Hillsboro VP and COO Ryan McCartney, is that the Hillsboro team focuses on personal relations in an industry that has become focused more on operational and transactional relationships. McCartney said Hillsboro took this approach in designing a facility with green technology and would attract a variety of customers. The facility incorporates Pacific Northwest detail including Douglas fir accents, a fireplace, and local artwork.

But that same approach extends to the workforce, McCartney added, noting that the facility has an “exceptionally large” number of long-time employees. Retention is particularly important when competition for new hires intensifies.

As for the future, Lyons said the company is eyeing development of nearby property for warehouse space, and McCartney added that additional hangar space may be a possibility. "Even though we’ve only been in this building for three years, we’re already starting to outgrow it," he added.

ADS-B: Everything You Need to Know