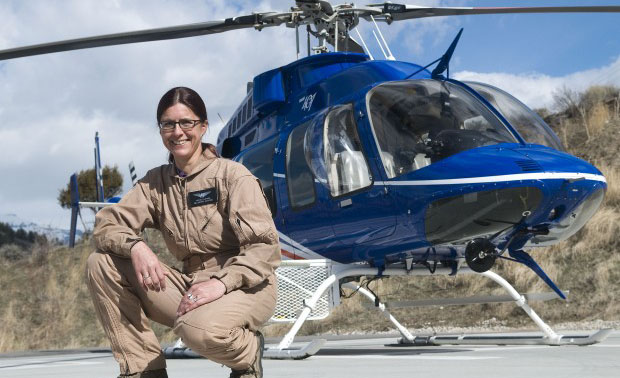 JACKSON — On Tuesday, Nicole Ludwig's third contract as the helicopter pilot for Teton County Search and Rescue came to an end.

During the past three winters, Ludwig has searched for people, dropped bombs to clear avalanche terrain for rescuers, picked up countless injured people and retrieved too many bodies.

The bodies, she said, are tough on her and definitely the worst part.

Otherwise she is living a childhood dream that incorporates many lifelong passions.

Ludwig, 42, grew up in the shadows of the Swiss Alps. From the time she was a little girl she wanted to fly helicopters. She dreamed of using the machines to rescue people in the mountains or help people in foreign countries, an early indication of her love for travel.

Her parents were supportive, she said, but they encouraged her to get a more practical degree, so she became an architect. After graduating, she traveled the world.

"At a certain point," Ludwig said, "it was either time to go back to Europe and become an architect or time to go after my dream of becoming a helicopter pilot."

Ludwig was accepted at Hillsboro Aviation, a helicopter flight training academy in Portland, Ore. It is much less expensive to become a pilot in the United States than in Europe, she said, and the schools she attended in the U.S. helped her get visas and eventually a green card. Ludwig received her commercial license and flight instruction certification from Hillsboro Aviation, pursued an associate degree in aviation science at Portland Community College and then returned to Hillsboro as an instructor.

A former student of Ludwig's, Daniel Aufdenblatten, also from Switzerland, received the highest honor in aviation, the Heroism Award, in Washington, D.C., in 2011 for a rescue he performed on the flanks of Annapurna in Nepal. He picked up injured climbers at about 23,000 feet, making it the highest-altitude rescue ever made in a helicopter.

From teaching Ludwig moved to piloting scenic helicopter tours over the Grand Canyon. She said flying over the canyon was "thrilling" as well as challenging, an aspect of operating helicopters she has always enjoyed. "I love challenges," she said. "You only get better when you are challenged."

Challenges and her desire to help people eventually led Ludwig north into the Rockies.

Now she spends summers fighting fires from a base in Durango, Colo., and winters flying Teton County Search and Rescue's Bell 407 helicopter.

From Colorado, Ludwig travels all over the U.S., keeping her love for traveling satisfied. In Jackson she gets to fly through one of the most spectacular landscapes in the world, fulfilling her love for the outdoors, which also conveniently re minds her of home.

"I love to work here because of the outdoor environment," Ludwig said. "Jackson reminds me a lot of my own town, satisfies a longing for going home."

Search and rescue and fires are similar in that there is a lot of waiting around, Ludwig said. By law, she must take 13 days off every three months, but the rest of the time she is on call, ready to fly at a moment's notice.

In her spare time, whether at base camps across the Rockies or in the hangar of the Teton County Search and Rescue building near the intersection of Highway 22 and Broadway, Ludwig paints and makes jewelry. Her interest in art is related to her time as an architect, she thinks.

Despite all the waiting around, when an emergency surfaces, Ludwig has to be ready.

"When the call does come," she said, "you have to be able to handle the adrenaline, and you have to be at your best." Still, she recognizes that she is nothing without the other members of search and rescue or the firefighters on the ground.

"You cannot be successful without a team behind you," Ludwig said. "Having a great team, a professional team — even though Teton County Search and Rescue is all volunteers, they are very well trained — is essential." Ludwig's overriding concern every mission is getting herself and her team home safely.

"You push the limits because people's lives are on the line," she said.

Ludwig flew 18 missions this winter, fewer than in past years.

She looks forward to returning next year for more.